Jacob "Hysteria" Reiser is a retired player. He is most notable for his time with Triggers Down and Cloud9.

Jacob Reiser was born on February 24, 1992. He is from Lynwood, Washington.

Jacob "Hysteria" Reiser began his professional career attending MLG Charlotte 2007 as a member of Rainbow Riders with CallMeGod, Perplexity and Rudy, finishing 28th. Steadily improving from there, he and Rudy attended Meadowlands under the same banner, this time with Cloud and UnknownGod99 getting 17th. He, Cloud and Rudy then formed Believe The Hype, alongside FrozeninShook, for Dallas where they finished 18th. Rudy was swapped for B Rizzle before Chicago where they got themselves into 14th. He and Cloud remade the roster with Eli and Joe, for Orlando again finishing 14th. They then swapped Eli for Perplexity, before Vegas where they went home with an 11th place finish.

Hysteria joined forced with SK and Fearitself to start 2008, to form the core lineup of Triggers Down for the entire year. The squad started the year attending Meadowlands with Lowkin where they finished 4th. Lowkin was swapped with Victory X for San Diego where the team finished 3rd. They then went on to win Orlando with Snip3down in place of Victory X, for Hysteria's first tournament win. Snip3down left before Toronto causing the team to use Mackeo in their 6th place finish there. They would replace Mackeo with Karma for the final two events of the year, netting him his second tournament win in Dallas, before finishing 5th at the National Championships in Vegas. Hysteria was named the 2008 Stride Championship Series Player of the Year, winning $2,500 and a year's supply of Stride gum. 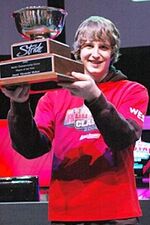 Hysteria with the 2008 Stride Championship Series Player of the Year trophy.

Hysteria remained with SK and Triggers Down throughout 2009, bringing him even more success. The team would maintain a stable roster for 5 events now including Heinz and iGoturPistola. The team would finish 1st at Meadowlands, 2nd at Columbus and 1st at Dallas and Anaheim, bringing Hysteria to 5 tournament wins. They finished the year with an unexpected 5th place at the National Championship in Orlando.

Heinz left the team at the start of 2010 and was replaced with Neighbor for Orlando, where the team finished 6th. Pistola was then switched with Totz for Columbus but the team only finished 8th. The last three tournaments of the year would finally see Triggers Down solidify a roster, the departure of SK caused them to pick up Best Man for Raleigh, D.C. and Dallas finishing 3rd, 2nd and 4th respectively.

Reach would be a less successful period for Hysteria. He remained on Triggers Down for the first three events of the year, welcoming back SK. MLG Dallas 2011 saw them joined by Best Man and Heinz for a 9th place finish. Heinz left before Columbus causing the team to pick up Loki, resulting in a 14th place finish. He and SK recruited Naded and Amish Acorns for Anaheim but they only managed to finish 15th. This prompted Hysteria to rejoin Fearitself and Victory X on Final Boss for the remainder of the year. Bringing Amish Acorns with him, the squad got 10th place in Raleigh. Amish Acorns was then swapped for the final two events of the year, earning the team 10th place in Orlando and 6th in Providence.

Hysteria played at the Halo 4 Exhibition at the MLG Fall Championship 2012 in Dallas as a member of Triggers Down, alongside Elumnite, Naded and Neighbor, finishing 17th/18th. This would be Hysteria's only venture into Halo 4.

Hysteria attended the pre-launch PAX Prime Showdown 2014 as a member of Triggers Down and placed 3rd. Hysteria then joined The Agency, with Victory X, Ninja and FearitSelf and placed top 6 at the ESL MCC Launch Invitational. The Agency was acquired by the Cloud9 eSports organization on November 26, 2014,[2] at the beginning of the HCS Season. They placed 4th at Iron Games Columbus 2014, 5th at UGC St. Louis 2015 and 4th at Gamers For Giving 2015. They went into the season finals at PAX East 2015 as the #5 seed and again placed 4th.

Cloud9 disbanded over the offseason. Hysteria spent a short amount of time on a reformed Believe the Hype with Cloud, Spartan and Commonly before joining Team Liquid alongside Ninja, Ace and UnLegit. His tenure with Liquid lasted only two online cups. He spent a short amount of time with Leftovers and Team EnVyUs before forming Triggers Pound with Cloud, Assault and Danoxide. Triggers Pound successfully qualified for the Halo World Championship NA Regional Finals, where they finished 2nd in their pool and qualified for Halo World Championship 2016. They were then signed by Cloud9. At Worlds, Cloud9 was the only American team to lose to a foreign team, and as a result, the only American team to not make it out of pool play, finishing in the top 16.